Natasha and Signs and Symbols by Vladimir Nabokov 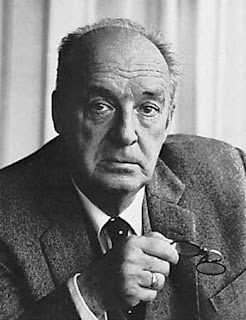 I’m in the middle of reading Azar Nafisi’s landmark novel/biography Reading Lolita in Tehran which is about an unusual book club in Iran. As the title suggests, Vladimir Nabokov’s Lolita plays a huge part of the story and Nabokov himself seems almost like a character in the book; so often is he mentioned, quoted and dissected.  It made me very curious about his work. So, I put aside Nafisi’s novel for a bit and went hunting for Nabokov’s short stories online. Sadly, I could only find two, but I definitely plan to read more of him this year.

Natasha is a strangely hypnotic story about a young girl who cares for her ailing father. One day her neighbor asks her out for a picnic and she happily goes along since her father seems to be recovering. I really mustn't say anymore because there isn't such a lot in terms of a plot anyway. It may seem predictable yet the ending really surprised me with its abruptness.

The story begins with an elderly couple choosing a birthday gift for their son who is being treated at a mental health facility. We learn that their son is suffering from ‘referential mania’ which is a form of paranoia where he feels that everything around him is concentrated on his existence alone. His parents reach the facility, only to be told that they cannot meet their son because he attempted suicide again and cannot be allowed to have visitors in this fragile state. The rest of the story follows the parents back home and stays with them through a terribly sad evening. The ending is poignant and so skilfully written.

I cannot decide which one of the stories I liked more. Both were so haunting and affecting, yet so simple. Nabokov has a way of making up really simple characters, putting them in fairly commonplace situations and yet making the whole thing quite an extraordinary experience for the reader. You can read the stories here and here.

I can’t decide which of his novels to read first. Lolita is of course his most iconic work, but Invitation to a Beheading sounds very interesting too.  Nabokov has also written a big bunch of short stories.  Anyone read any of these?
Posted by CHE at 9:58 AM

CHE
I am Che and this is my reading nook on the net. I mostly read what is known as literary fiction with the occasional biography or non-fiction work thrown in just to spice things up. In the real world I'm a stay-at-home mom to my three year old boy so I also read a lot of board books and Dr Seuss . In other words, everything from Kafka to Kindergarten. For more bookish chit-chat you can email me at Kinderkafka@gmail.com

I'm in the Literary Blog Directory